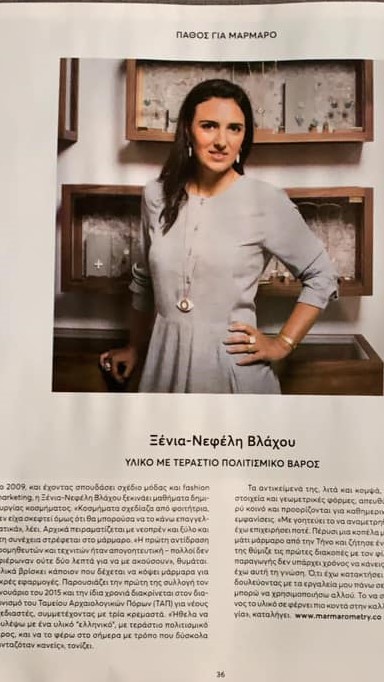 Posted at 10:32h in News by marmarometry 0 Comments
0 Likes
Share

An interview of the designer and owner of Marmarometry, Xenia Nefelly Vlachou, from Xenia Georgiadou, for “K” Magazine of the Greek newspaper “Kathimerini”. 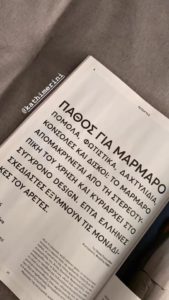 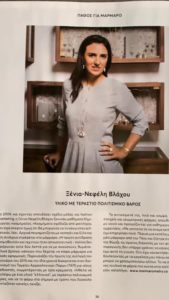 In 2009, and having studied fashion design and fashion marketing, Xenia Nefelly Vlachou began taking jewelry-making lessons. “I had been designing jewelry since I was a student, but I never thought that I could do it professionally,” she says.

Initially she experimented with neoprene and wood, before later turning to marble. “The first reaction of suppliers and masons was disheartening – many didn’t even take a couple of minutes to hear me out,” she recalls. She finally found someone who would cut marble for use in small objects. She presented her first collection in January of 2015, and in the same year picked up awards at a competition held by the Fund of Archaeological Proceeds (TAP) for new designers in which she submitted three pieces.

“I wanted to work with a material that is ‘Greek’, with a massive cultural weight, and to bring it into today in a way that few could imagine,” she says.